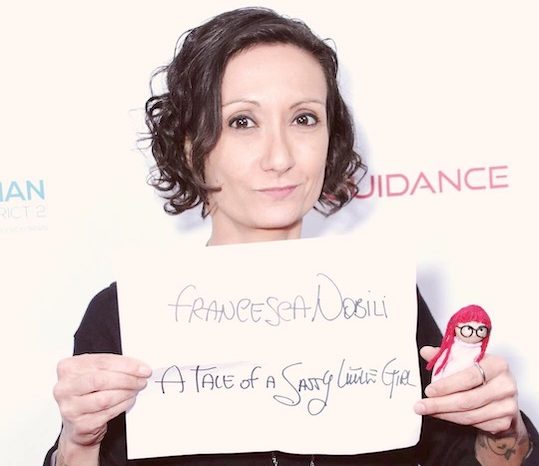 WALKING ON THE RED

“I can’t stand the bittersweet flavor because, like everything else in my life, I have no middle ground!”

She drops everything and moves to Los Angeles to live with her puppets. As to rebellion, nobody beats Francesca!

Francesca Nobili  does many things in California. But what she loves the most, what made her – literally – a Wonder Woman in the filmmaking industry is stop motion animation.

Do you know what I am talking about? You place a puppet in front of a camera and you move it a little bit. And you shoot. Then, you move it a hundredth of a second and you get another frame. And so on, with the patience of a medieval miniaturist. Eventually, you play all the images in sequence and, as if by magic, the shots turn into a fluid, natural movement. And the puppet comes alive before your eyes. As if it were alive.

This is the magic of stop motion animation. And this is the revolution of her life.

I met Francesca many many years ago. We were both attending a specialization course at IED Milan. Creative Content Writing or something like that.

I was already in my 40s, a rare bird who didn’t even get a chance for an internship at the end of the course. But Francesca, who was an introverted but smart and brilliant girl, started her career in advertising.

An adventure that led her to work in almost every sector of advertising. And here you must excuse my ignorance if I can’t come up with all the Ostrogothic terms that advertisers like to use to describe themselves! What I know is that her business card boasts many of those roles, so many to embarrass Google Translate.

In her dictionary of talents, one term began to be printed in larger and larger characters: VIDEO.

Francesca realized right away that she could encapsulate her limitless originality, the naturalness that always put her outside the box, no matter what. And then, her aesthetic sense, made of rhythm and irony, of obsessive attention to detail and tactile care towards materials. Touching with your eyes. When you watch one of her stop motion animation short films, that’s the feeling.

How did she get into claymation? I don’t know, I never asked her. But I like to think it was a love at first sight that, over time, has turned into one of those loves that last forever, the kind of love poets write about.

Why Los Angeles? “Because, of all places, this is the one I call home” she tells me. “I have been traveling all my life but this is the only city where everything looks and feels right. And, you know, you can never be a prophet in your own land. Italy and Europe have always snubbed my work, whereas it was screened and awarded dozens of times in the USA and in other countries worldwide. They get me, clearly this is my audience!”

Let’s be honest: Francesca can’t put up with the fact that Amatriciana – a 2-minutes long (true) story of Francesco Leonardi, who reinvented the ancient Gricia recipe into the modern Amatriciana recipe – wasn’t selected at any Italian film festival, despite being created to commemorate the 299 victims of the earthquake of August 24th, 2016.

WALKING ON THE RED

Dr. Martens boots on her feet and bowler hat on her head, Francesca has walked many red carpets so far, always as a protagonist. I make jokes about her adding frames to her latest stop motion short film, A Tale Of A Sassy Little Girl, just to include all the laurels! ‘Cause, seriously, they are a lot. “I am a One-Woman-Film-Crew, aka I do and make basically everything. I am the prop maker and the set designer/builder/decorator, I animate and shoot, editing and sound design are two of my favorites things. But I never aim for perfection. If anything, I like to show the materials on camera, in a way you can almost feel it, such as the hot glue used to keep all the pieces together or the creases in the paper background… The artisan, playful spirit of my short films is in every detail.”

AN ALIEN OF EXTRAORDINARY ABILITY

Do you make a living from it? “Nope. But that’s how I got my US worker visa. According to it, I am an “alien of extraordinary ability”. “Alien”… I love it! It’s the best way I’ve ever heard myself defined. In the less interesting part of my day, I still work in advertising and marketing, now more as a cultural/linguistic consultant and transcreator, than as a real creative.”

The job she loves the most, just after the animation, is art direction. “I wish I could make a living just from that. Because that’s what I am good at: creating worlds, working with directors and writers to build sets that will bring their vision to life.”

Now, think about it: how could have I missed Francesca’s gustatory profile?

YOU ARE WHAT YOU EAT

From a physiological point of view, her sense of taste is well-balanced but, as you can immediately notice, tending towards intensity. The bitter taste, if needed, must be bitter. The sweet taste, sweet. Such a determination leaves no room for certain hints, such as umami’s one. It is no coincidence that her favorite color is red, a shade that does not allow discussions, a determined, intense, strong, volitional color.

Francesca eats exactly how she lives: without half measures. Certainly, not with regards to quantity (she is a slender woman), but the quality she accepts knows no compromises.

THE TASTE OF EXILE

But it becomes difficult to understand what Francesca’s real profile is. Living abroad, especially in a place like California, her cravings are mainly aimed at the real and authentic food of her home, something that is not a faded photocopy of her desire. “I found myself looking for strong and well defined flavors, in a country where everything is covered with sauce and dressing. I realized that I have a very demanding palate that no avocado or Alfredo sauce (never tried, I refuse to) will ever offer. I love everything that is salty, spicy, decisive, I can’t stand the bittersweet flavor because, like everything in my life, I have no middle ground, it’s all white or black, beautiful or ugly, sweet or salty! I miss salami, pancetta, mozzarella, bread, mayonnaise and our typical desserts.”

Precisely for this reason, accustomed as I am to my Italian customers who live in Italy, I made the mistake of offering many dishes “for refined palates”, and she gave me the puzzled look. The look of a woman who is really hungry, a woman who can do little with green apple mayonnaise, especially if she is dreaming of Abruzzese Arrosticini and Cacio e Pepe spaghetti done by the book. On top of that, Francesca has a real cooking instinct, complete with a compass enthralled by the South of Italy. Give her four good ingredients and she will prepare a dish that will taste of sun and truthfulness. “The problem is that the only thing I find tasty here is the bacon cheeseburger… I come from a poor but local, genuine tradition, without half measures, without compromise. I love Los Angeles and feel at home here. But Italy still holds the true flavors of my life captive.”

Tips for shopping. It may seem out of place, but when I read something that interests me, then I want to know more. So, if you want, you can go and take a look at these books that talk in depth about stop motion animation and some films that, in my opinion, are among the most interesting that you can enjoy. Of course, I didn’t put the usual ones that you’ve seen for sure, but some gems you might not know …

TAWNY FOR TWO... OR FOR ONE! Il terzo tipo di Por

Powered by Convert Plus